Smart Machines: From Steel to Chip 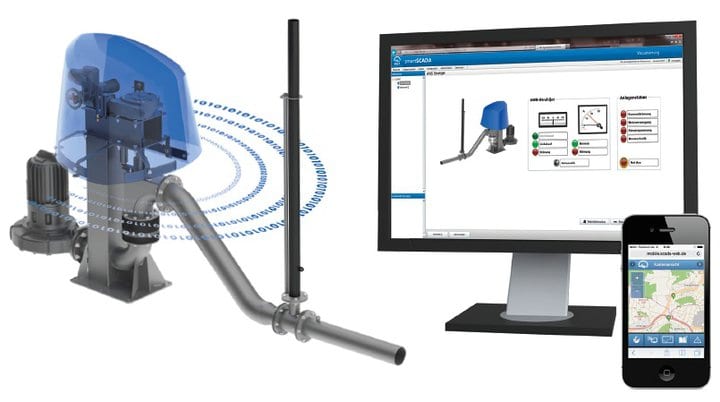 Automation technology, software and IT communication have constituted the basis of modern equipment systems in municipal infrastructures for many years. Initially, these were purely mechanical systems, mostly made of steel. Later they were supplemented with the first semi-automatic functions, then PLC controls for automation and monitoring via SCADA were introduced. The chip was thus attached to the steel.

MUNICIPAL 4.0 marks the beginning of a new development phase for municipal infrastructure technology. The focus is on intelligent machine automation-systems, the so-called SMART machines, which are already available today. Thanks to intelligent calculation algorithms and associated automation technology (Intelli systems), operators are able to set up operations that are adapted to the situation and thus save energy and improve security.

In the future, Intelli systems will become the crucial nodes of Municipal 4.0, when equipment components are transformed into SMART machines. This means that pumping stations, stormwater tanks, sewer treatment plants and flood retention basins, for example, become SMART objects and then connect to the central data and service platforms via the Internet. Here, the Intelli systems are developed with extended functions, networking with each other on the basis of high-resolution environmental data and thus forming the basic elements of a highly flexible and efficient network management.

After a rainfall event, dirt and sludge remain on the bottom of rainwater basins. Less than two decades ago, dirt was removed manually by the operating personnel. Today, mechanical flushing systems (flushing buckets or motor-driven components, such as pivoting jet cleaners) ensure nearly self-reliant cleaning. In order to ensure a sufficient cleaning result, multiple repetitions of the entire rinsing process are required as it is not always possible to clean the surface properly only with one rinse cycle. What would happen if there were an automatic detection of residual contamination? And any required subsequent cleaning would be fully automatic and limited to the remaining dirt spots? One intelligent machine-automation-system is the AWS jet cleaner with IntelliGrid system. Equipped with an optical sensor technology, the AWS jet cleaner checks the cleaning result on the bottom of the pool. The corresponding Intelli-System arranges the detection patterns into clean and uncleaned pool sections and returns the results to the PLC. If no optical sensor technology can be used, the operating personnel assigns the respective cleaning result to the corresponding pool sections via touch panel. In both cases, the AWS jet cleaner is operated in the energy-saving mode as it focuses on only positions that require further cleaning. 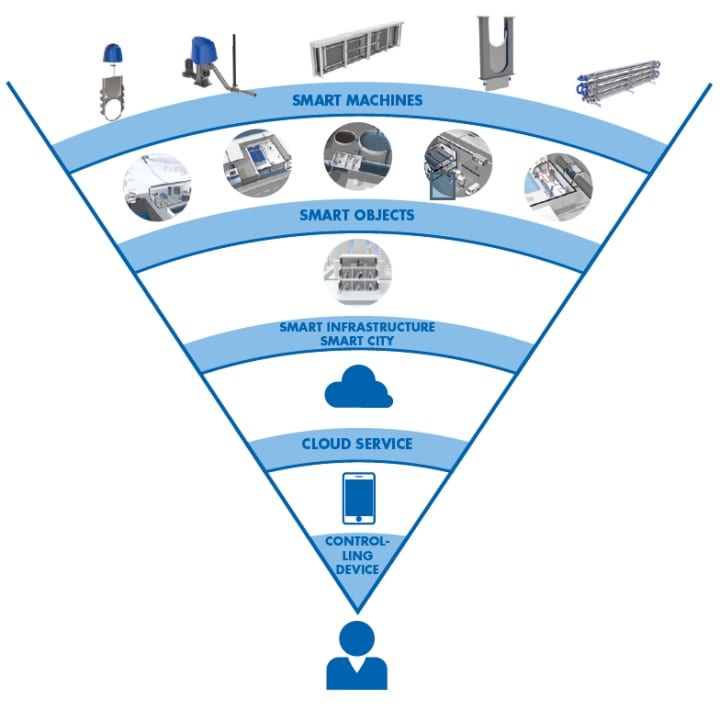 In the past, jet cleaners were generally dimensioned with the purpose of keeping tanks clean at all times even at the maximum expected contamination. Accordingly, the operations were set up to achieve the optimal performance. Impurities e.g. sediments that remain on the basin bottom after a rainfall event are mainly the result of the particle load contained in the mixed water. This varies greatly and is dependent on current and, above all, historical precipitation events. In the case of several precipitation events that happen repeatedly at short intervals, lower loads are to be expected in the inflow mixed water flow than after long dry periods. SMART machines, such as the AWS jet cleaner with IntelliGrid, adapt to this fluctuation based on real-time information (in this case the actual level of pollution on the bottom of the basin). In this manner, no unnecessary energy is wasted due to the rigid or maximum load and operating design.

There are other similar intelligent products. For example, pumps can be operated in the optimum characteristic curve, and thus energy-saving, thanks to IntelliPump. Or the screening cleaning rakes on overflow thresholds enable the detection of the occupied materials on the sliding bars and influence them with an Intelli-Screen-System. In this way, the “occupied material” is used as a filter at low inflow and removal is only started when the inflow increases.

With Intelli systems, static machines become dynamic-automatic systems. This also shapes the way to SMART Objects. By connecting Intelli devices to Web-based platforms where selected environmental data is analyzed and processed, advanced Intelli functions, as well as numerous different SMART machines, can be activated and coordinated. In the case of the AWS jet cleaner, for example, the IntelliGrid device will access the local precipitation forecasts from the NiRA.web portal and check at each event whether pool cleaning is basically required. If the module receives the information that a similar rainfall event will repeat itself within the next hours or days, the cleaning process will be omitted. Furthermore, the system also learns from the platform if, for example, a sewer treatment plant following the storm water tanks is acutely overloaded. In other words, the necessary cleaning of the tank and the associated removal of dirt can be performed later.

The digitalization in water management infrastructure technology has long begun with the implementation of Intelli systems. They shape the future backbone of a development when steel machines from the past become SMART machines of the present thanks to a chip. As intelligent components in SMART Objects, Intelli systems make infrastructure management as modern and efficient as possible.

IntelliGrid – System for efficient pool cleaning through targeted control of jet cleaners. Sediments at critical spots are detected and removed.

Knowing when and where it’s going to rain and how much. The Web portal “NiRA.web” provides information on precipitation and associated cleaning requirements.

Detection of congestion and pollution in flood retention and rainwater basins. Manually or automatically with HST-TeleCam (original picture).

Information about congestion, precipitation and the pollution grid are collected, stored and evaluated centrally.

NiRA.web, SCADA.web, TeleCam and IntelliGrid inform when and where contamination occurs and thus enable the operation of intelligent, event- and result-oriented cleaning.

PrevPreviousParticipation in Pilot projects in MUNICIPAL 4.0
NextQuick access to MUNICIPAL 4.0 with NiRA.webNext