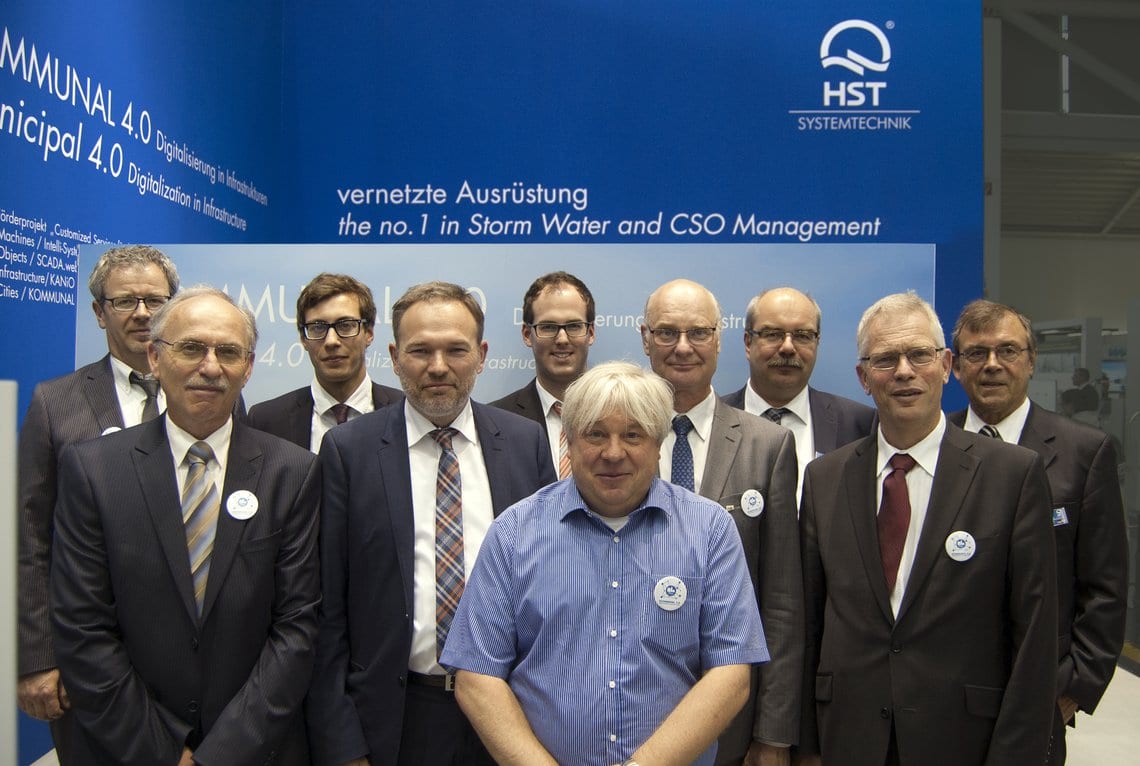 MUNICIPAL 4.0 was presented to the public audience for the first time at this year’s IFAT trade fair from 30.05 – 03.06.2016. Below is a review from the perspective of the project manager Mr. Dipl.-Ing. Müller-Czygan:

One-week-IFAT. A one-week-opportunity for audience to keep updated with the digitalization in the water industry.

For many exhibitors digitization was a topic with different terms (Industry 4.0, Smart, Water 4.0 etc.) and different offers (control modules integrated in machines, software modelling, machine access via app etc.). However, the topic of IT security could be found only occasionally.

In the many conversations and discussions, however, a great openness for the upcoming digital transformation could be seen, even if, as expected, a certain reluctance still prevails on the part of many German municipalities and providers, and one wants to observe first. But there are also market participants who are tackling the topic very seriously and decisively. A sewage association, for example, is increasingly using the OPC UA protocol for the communication of outer stations with the control center, which already integrates authentication and authorization, encryption and data integrity by marking as a security measure. In contrast, other municipalities and associations do not see any need to take new paths towards digitalization. It also became apparent that many local authorities and plant operators want to enable more automated data processing and reporting from a wide variety of data sources.

The great international interest in MUNICIPAL 4.0 was surprising: In many countries, the trend towards decentralized settlement units (so-called compounds) is becoming apparent in residential areas. Here, the entire districts with their own infrastructure (e.g. their own sewage treatment plant) are planned and everything should be smart. There is still a great demand for German technology, especially for the know-how in water management process. However, if the development of digitization in municipal water management remains as modest at home as in some segments of Industry 4.0, the business will be taken by other countries.

It has been shown that the MUNICIPAL 4.0 project not only reflects the current developments in water management. It is at the front-runners in terms of both technology and processes, and thus, fulfills the lighthouse function desired in the associated Smart Service World technology competition ntionally and internationally. Only MUNICIPAL 4.0 actually offers solutions and ideas for cross-infrastructure concepts including smart machines, as can be seen from the many different cooperation requests that were submitted to the project partners of MUNICIPAL 4.0 at IFAT.

IFAT has thus more than fulfilled its purpose as a location for MUNICIPAL 4.0. Most of the previous ideas and concepts have been confirmed by the market, but new ideas as well as expressed concerns are now being incorporated into further project work. It is expected that the apparent willingness of the market participants to cooperate with MUNICIPAL 4.0 will result in numerous activities in order to be able to implement the special features of the concepts, ideas and solutions on a broad basis.

In summary, it should be noted that the big hype like at the Hannover Messe with Industry 4.0 did not yet appear with the digitalization at IFAT 2016. This can be expected at IFAT 2018.